The makers of Firefox have introduced a new mobile web browser for iOS users that puts private browsing at the forefront of the user experience. Called Firefox Focus, the mobile browser by default blocks ad trackers, and erases your browsing history, including your passwords and cookies.

Browse like no one’s watching. The new Firefox Focus automatically blocks a wide range of online trackers — from the moment you launch it to the second you leave it. Easily erase your history, passwords and cookies, so you won’t get followed by things like unwanted ads.

The end result is a simplified browser that may load web pages more quickly, the company claims, given that ads and other web trackers can bog down pages and impact performance.

The app was originally launched on the App Store almost a year ago, but at the time was designed as an ad-blocking utility that could remove ads and trackers from iPhone’s Safari browser. That feature is still available in the revamped app, but it’s now aiming to compete more directly with Safari, too. 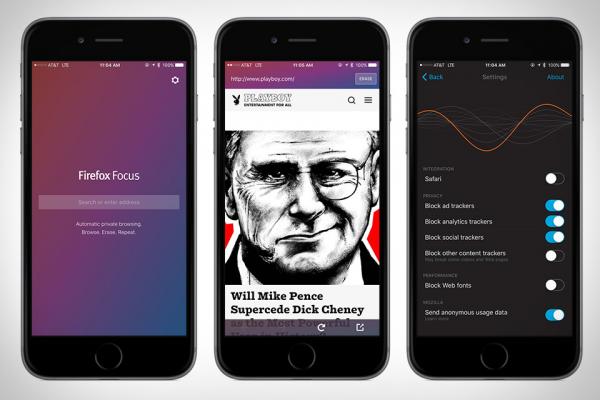 The browser itself doesn’t have any bells and whistles compared to its rivals, however. There are no tabs, no list of favourite sites, or numerous other configuration options. Instead, a trip to the Settings section only lets you toggle on or off the data you want to block, like ad trackers, analytics trackers, social trackers, other content trackers and web fonts. After you complete a web search, you can erase that activity with a simple press of an “erase” button. Firefox Focus could have automated this, but there’s something about manually clearing a search that feels cathartic.

Despite an increased interest in privacy — especially now, following this period of tumultuous political upheaval here in the U.S. — Firefox may again be too late the game to compete. Already, the top mobile browser makers offer private browsing modes, and there are a number of third-parties that have made private browsing a focus for years, like Tor. The App Store, too, is filled with utilities for private browsing, including a number of startups like Ghostery, Dolphin, Brave and others.